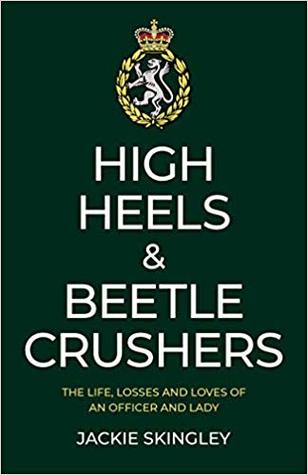 This memoir follows the life of Jackie Skingley as she grows from a young girl at home with her mother and stepfather, to an aspiring young ladies determined to strike out on her own by joining the Women's Royal Army Corps. The book is full of emotional stories of love and loss, as well as the great sense of camaraderie she found with the other women who joined the corps. The reader gets an understanding of the changes going on in Britain during the 1960s and how that affected women. Especially those who wanted to have a career and not just a life inside the home. It seemed a shame that married women had to choose whether to serve their country or build a life around a husband. But Mrs. Skingley faced that just like she faced any other obstacles and difficulties, head-on.

High Heels & Beetle Crushers is more than just a personal memoir. It's a look at the changing roles of women in the 1960's. I found Mrs. Skingley to be an excellent storyteller. I became so engrossed in her story and with the details of how she handled issues that came up either while she was on duty or while trying to manage her personal life that I had a hard time putting the book down. I have a feeling that she might have some more exciting stories up her sleeve that readers would love to hear.

Posted by Susannesbooklist at 7:46 AM