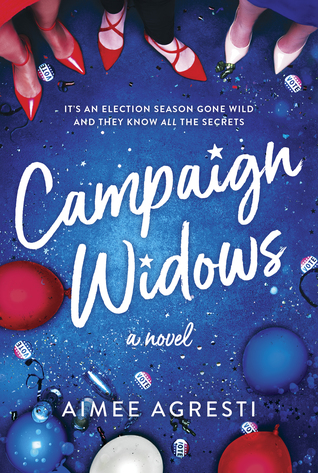 This fun story follows a group of characters who work in Washington D.C. as journalists, campaigners, and socialites. The main character Cady has recently relocated to D.C. to be with her boyfriend, Jackson. The only problem, he's hardly ever around. Instead, he's with his boss out on the presidential campaign trail which leaves Cady mostly alone. Luckily, it doesn't take her long to meet new friends, not least of which is Birdie a local socialite, known for her great parties. She will be a useful ally for Cady to have as she tries to navigate her way through the cities array of prominent residents while she works for one of the cities morning television programs. When Cady finds that she has access to a potential first lady who isn't too keen to have the job her career takes off. And as she tries to work out her relationship with Jackson she relies on friends to keep her going when he isn't around.

Campaign Widows was a delight to read. It was fun, lighthearted and full of lively characters. So, if your tired of the current political scene let Agresti whisk you away to a more entertaining one.

Thanks to Graydon House Books for allowing me to read this book in exchange for an honest review.

Posted by Susannesbooklist at 2:33 PM