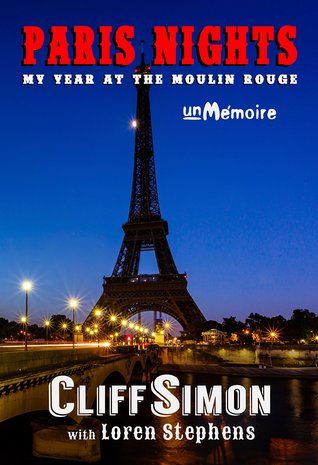 Paris Nights
My Year at the Moulin Rouge
Cliff Simon

Cliff Simon, a South African native, got the chance of a lifetime when his friend Gavin informed him that there was a position as a dancer available at the famed Moulin Rouge in Paris. He didn't hesitate to get the next plane to Paris where he would spend the next year in the cabaret troupe: first as a swing dancer, then as chorus boy, and ultimately as a principle performer. This book explores his year in Paris, which was full of fun, friends, adventure, and the hard work of regularly performing two shows a night.

If the aim of a good memoir is to let the reader into someone's life and give them a taste of some interesting and unique experiences, then this book definitely measures up. It gives the reader information about the author's early life and what he did before he moved to Paris. That in itself was interesting and set the stage for his year in France. The book was entertaining as well. I got a real sense of the author's character and personality. Some of the adventures mentioned, especially the one involving the shady Jean Paul, were fascinating. I had the feeling that "Cleef," as his French friends referred to him, never experienced a dull moment in the City of Lights.

I particularly liked the fact that none of the anecdotes were left unfinished. The reader found out exactly what happened to all the characters mentioned in the book. The inclusion of numerous photos was a great idea. It made me feel like I had a better connection to the author, his friends, and family. And while this book was meant to cover his year in Paris, I appreciated the fact that the ending told me how the author's life progressed after he left Paris. It's clear that he enjoyed a good challenge and was not afraid to take risks, which no doubt led to his ability to create a life he enjoyed and memories he could share with others.

Originally written for and published by San Francisco Book Review.
Posted by Susannesbooklist at 9:16 AM