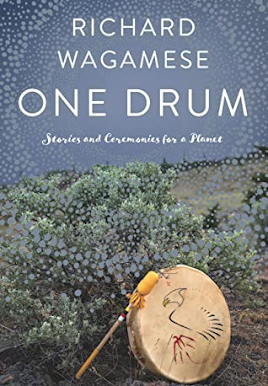 In One Drum, Richard Wagamese shares stories, ceremonies, and teachings from the Ojibway people of Northwestern Ontario. All are concerned with our spiritual journey on this planet. As he explains, we are part of Creation, living on one sacred breath. This is the first ceremony he shares, allowing one to connect with one's feelings in order to recognize the sacred breath of Creation within. The second ceremony, the Tobacco Offering, focuses on being thankful. The third ceremony is a Vision Quest, which allows one to be brave and to recognize being part of everything. The fourth and final ceremony is entitled Acting Outwardly. This one is intended to make one aware of the nature of sacrifice.

In between the ceremonies, Wagamese presents tales of humility, discovery, bravery, and harmony, all of which remind us to walk gently upon the earth and do no harm to one another. He also shares his personal story about how he came to learn the importance of these teachings and what they meant to him as he became reacquainted with his traditional roots. One Drum is one of the most moving, powerful, and profoundly spiritual books that I've ever read. I feel honored to have found this beautiful gem.

Posted by Susannesbooklist at 7:57 AM