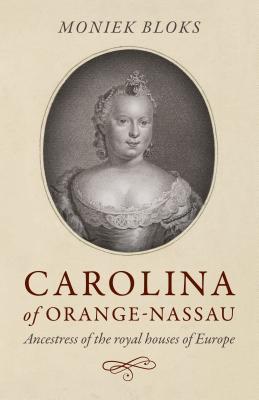 Princess Wilhelmina Carolina of Orange-Nassau was born in 1743 to William IV Prince of Orange and Anne of Hanover. When her father was made Stadtholder to the Dutch Republic, she was included in the line of succession, in the event that there were no male heirs. But as a little brother was later born, he eventually took the position of his father although Carolina did act as regent for him until he came of age.

I have to admit, probably like a lot of readers I didn't know anything about Carolina of Orange-Nassau before reading this book. And I agree with the author that she has been largely forgotten by history, which is a pity because she seemed to play such an essential role in her brother's early life and when acting as regent on his behalf. But what struck me most was the fact that by the time she was 43 years old she'd had sixteen pregnancies that resulted in fifteen births of which only seven children survived to adulthood. Of course, this wasn't unusual at the time, and the author points out the numerous pregnancies and deaths of Carolina's mother and others. However, it is so difficult to imagine the hardships these women and especially Carolina endured. Despite the numerous pregnancies and changing circumstances, Carolina was able to run a household, take an interest in her husband's affairs and find time for promoting the music she loved. At one point while organizing a concert, she took an interest in Mozart and his sister. Both were ill at the time of their visit, and due to her care and attention, they were able to recover in her home, perhaps shaping the history of music in the course.

This account of her life is fascinating on its own but also noteworthy due to the fact that her descendants are scattered across the Royal Houses of Europe. I was also happy to learn that the author runs a blog devoted to the history of royal women.


Thanks to Chronos Books for allowing me to read this book in exchange for an honest review.

Posted by Susannesbooklist at 11:32 AM